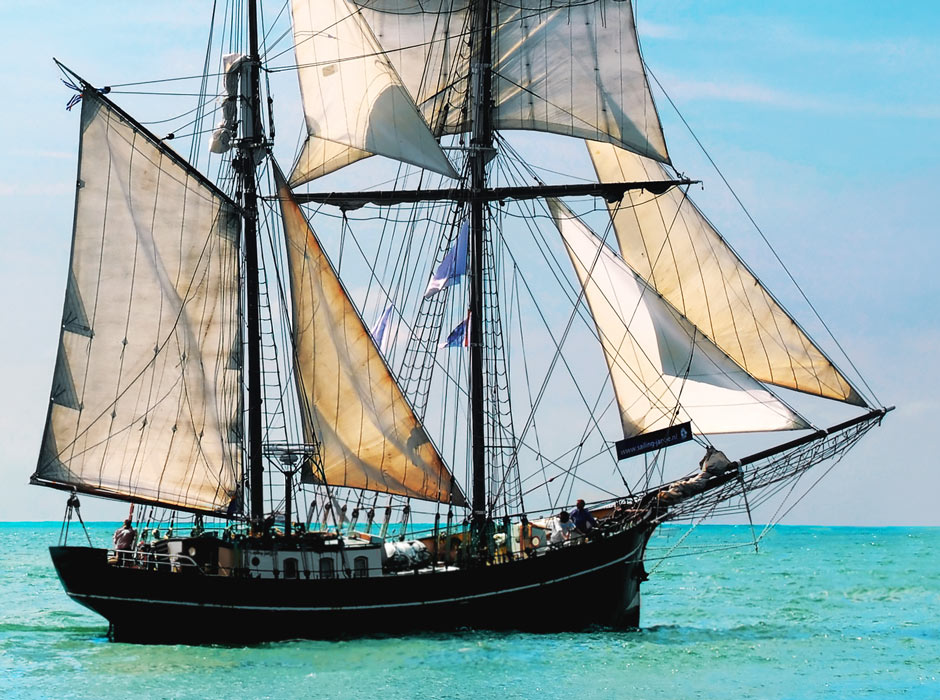 The original inhabitants of the Bahamas, before the arrival of Europeans, were the Lucayan. They were a branch of the Taínos, who had expanded throughout the Caribbean in dugout canoes from Hispaniola and Cuba between 500 and 800 AD.“Lucayan” is from the Spanish Lucayos, derived from the Tainos’ own description Lukku-Cairi, meaning “island men” or “people of the islands.” Cairi, the Taino word for “island,” became cayo in Spanish and “cay” ( pronounced “key” ) in English.

The Lucayan were the first inhabitants of the Americas encountered by Christopher Columbus in 1492. They were described as handsome, graceful, gentle, generous and peaceful. The Spanish started seizing Lucayans as slaves within a few years of Columbus’s arrival and by the 1520s more than 20,000 had been removed to silver mines and sugar plantations in Hispaniola and Cuba, leaving the Bahamas virtually uninhabited.

Juan Ponce de Leon is reputed to have stopped by the islands in 1513 during his search for the fabled Fountain of Youth, but he found nothing of value except the local inhabitants, a small number of Lucayan, who he captured and enslaved.

Then the pirates arrived. They, too, found little of value, but the remote location and the many tiny cays, bays and inlets made fine hideouts from which to attack treasure-laden galleons carrying spoils back to Europe. And, the rocky coastline was a great asset in increasing their second source of income, “wrecking” — plundering accident-damaged ships as they sunk.

In 1595, a flotilla of 17 Spanish treasure galleons sank off the coast of Treasure Cay, Abaco. To this day, only a few have been found.

The British are coming!

The first European settlers of Abaco were Pro-British Loyalists who arrived in 1783, fleeing the aftermath of the American Revolution. They made a modest living by salvaging wrecks, building small wooden boats and simple farming. Roughly 600 of them founded Carleton Point, the first Loyalist settlement on Great Abaco, near the present-day resort of Treasure Cay.

Early attempts to grow cotton flourished and Abaco’s population grew to over 2,000 people. But the plantations failed within a few years due to pests and soil depletion. Most of the settlers moved away, leaving a population of 200 white planters and 200 black slaves. Some moved on to nearby islands of New Plymouth, Green Turtle Cay, Hope Town and Man-O-War, passing on their building and fishing skills to each generation.In the 1800s, The Abaco Islands took on a New England-like character as fishing, wooden boatbuilding and wrecking became the mainstays of the local economy. After 100 years, however, the boatbuilding industry diminished because it had stripped the islands of hardwoods.

In the 1860s, during the American Civil War, Confederate blockade-runners would tuck away their ships in the nooks and crannies along the coasts of the Abacos and Andros to evade the Union navy. Bahamian merchants, already benefiting from increased commerce, also profited by letting the smugglers use their facilities as supply bases. The end of the war brought a deep recession to the Bahamas and wrecking returned as one of the primary industries.

Yo ho ho and a bottle of rum

With American Prohibition in 1919, the Bahamas again became port-of-call for the nefarious. Bahamian Rum became the export of choice to the mainland, where liquors were now illegal. Bootleggers set up camp among the Biminis, only 50 miles from Miami, as well as smaller operations throughout the islands. After prohibition ended in 1933 and the United States fell into a depression, the Bahamas returned to a life of subsistence agriculture and fishing.

In November 1944, during World War II, German submarine commander Paul Schmidt was thrilled by the breathtaking view of the magnificent white sand beaches and turquoise waters of the Bahamas. He vowed to himself and his crew that if he survived the war, he would return to Treasure Cay someday and build a home.

In 1968, he kept his vow.In 1962 Captain Leonard Thompson, a former Royal Air Force pilot from nearby Marsh Harbour, and America’s largest Chevrolet dealer, Dumas Milner, joined in developing Treasure Cay by digging 7 miles of canal systems through the mangroves.

On July 10, 1973, the Bahamas gained its independence from Britain.In 1984 Treasure Cay started its first annual Billfish Tournament. By 1988 Treasure Cay had established itself as the #1 Spot for catching Blue Marlin in The Bahamas.

In 1996, a 1,030 lb Blue Marlin, the second largest ever in the Bahamas, was caught off Treasure Cay. This is the first “Grander” caught in the Abacos and is on display near the Spinnaker Restaurant.

Treasure Cay has one of the finest marinas in The Bahamas with over 150 slips, accommodating yachts up to 140 feet. Treasure Cay has a 6,900-foot paved runway with flights arriving daily from Ft. Lauderdale, Miami, Orlando, West Palm Beach and Nassau.Today, with excellent boating, fishing and scuba diving and a pristine 3 1/2 mile white sand beach Caribbean Travel and Life magazine called “The best beach in the Caribbean” and National Geographic called “One of the 10 best beaches in the world,” Treasure Cay ranks unsurpassed among tourist destinations in The Bahamas.