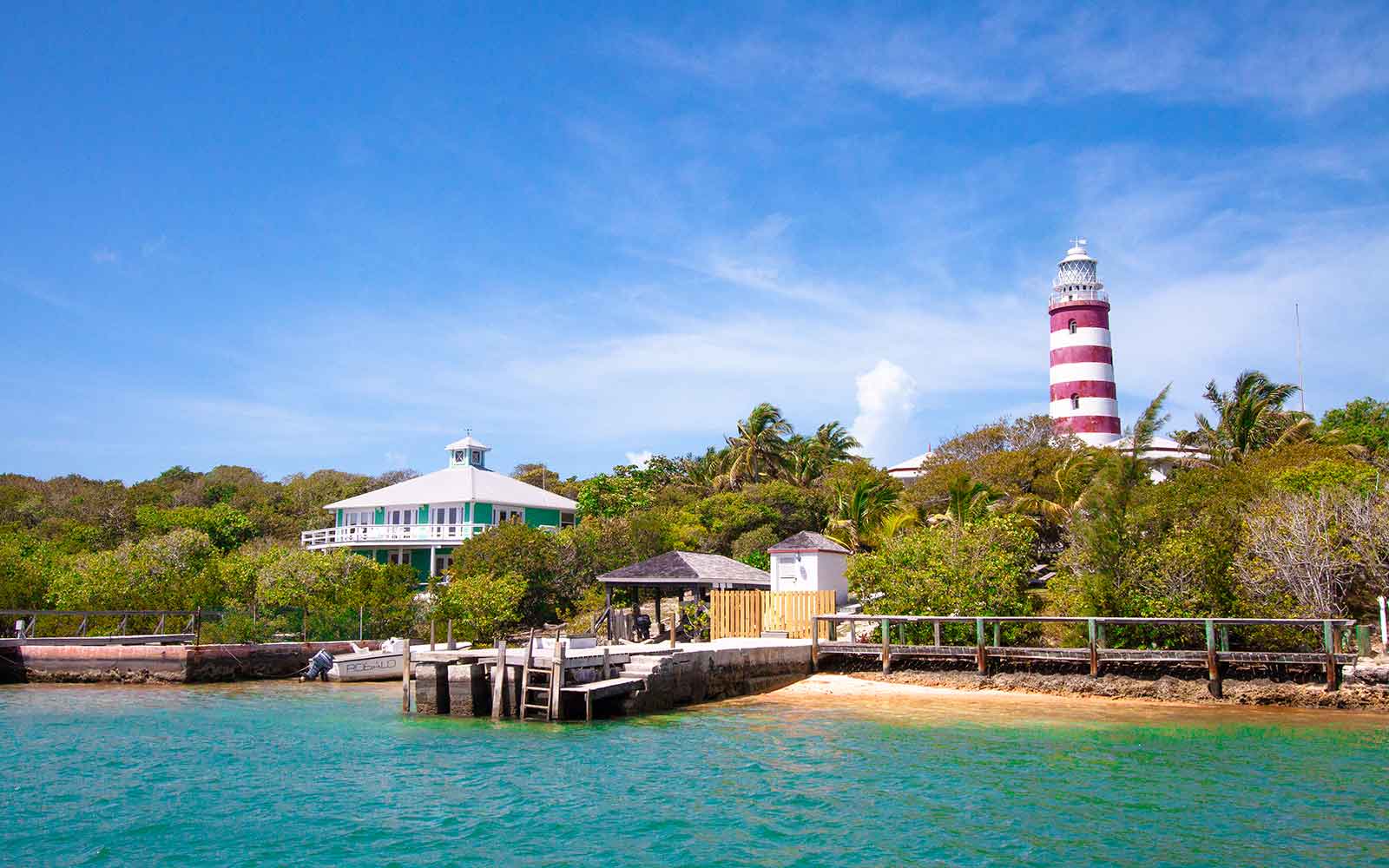 Our day trip adventure begins with a drive to Marsh Harbour, just 26 miles east of Bahama Beach Club, our beautiful resort hotel in Treasure Cay. From the dock in Marsh Harbour, we catch a ferry across to Hope Town on Elbow Cay ( “Cay” comes from the Spanish word for “island” and is pronounced as “key”).

Gliding over deep cobalt-colored sea, we pass long islands outlined with miles of white sand beaches and occasional stretches of charcoal-grey volcanic rock ledges.The island’s famous candy-striped red-and-white Elbow Reef Lighthouse comes into view… The best-know landmark in the Abacos, the kerosene-fueled lighthouse is one of the last three manual lighthouses in the world.

Approaching Hope Town’s scenic harbor, the island’s famous candy-striped red-and-white Elbow Reef Lighthouse comes into view… The best-know landmark in the Abacos, the kerosene-fueled lighthouse is one of the last three manual lighthouses in the world. We’ll describe more about this iconic lighthouse and how you can climb its 101 steps to enjoy an unforgettable panorama from the top in a future post!

Around Hope TownThe placid harbor is studded with sailboats at anchor. Along the shore, and through the shallow hills above, historic clapboard buildings are nestled among graceful palms and other tropical trees.From the ferry dock, you can begin to explore this quaint, picturesque historic 18th-century settlement. Hope Town is a tropical storybook town, a world rendered in crayon with sugary pastels, vibrant hues and white picket fences. The whole town is a garden, adorned with brilliant flowers.

Hope Town was settled by British Loyalists who sought refuge after the American Revolution. Many of the settlers came from the Carolinas, through East Florida, after that area was turned over to Spain in the Peace of Paris (1783). The same treaty called for the evacuation of New York by the loyalists. While many people moved to England or Canada, some headed south to the British Caribbean. The settlement at Hope Town was founded in 1785, in part, by a widow from South Carolina named Wyannie Malone, who had moved to Elbow Cay with her children. By that time, there were more than 1,000 refugees in the Abacos, distributed in five or six settlements.

You can learn more about the history of the settlement and Elbow Cay at the Wyannie Malone Museum, located near the upper public dock. museum exhibits and preserves much of the settlement’s rich and diverse history through memorabilia, artifacts, old photos and documents.

In Hope Town, the frenzied pace of the modern world slows to the relaxed pace of a bygone age. In the main part of town cars and even golf carts are banned… walking and bicycles are the only means of transportation.

Over the years, Hope Town has become a popular day-trip because of its quaint picturesque appearance and its historic Loyalist houses, monuments, and cemeteries. There are several gift shops and restaurants along the town’s narrow streets. Have lunch and a Kalik (the Bahamas local beer) at the Hopetown Harbour Lodge, Captain Jack’s or Harbour’s Edge…

Just make sure you get back to the dock before the last ferry!